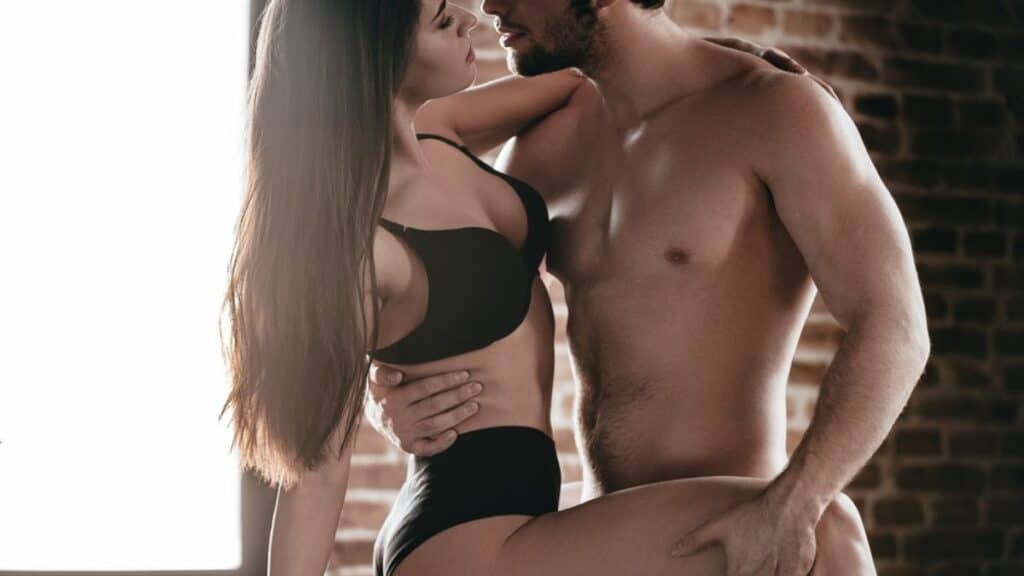 Take friction out of the equation with water or silicone based lubricants!!

Shop Now
We earn a commission if you make a purchase, at no additional cost to you.

What Is the Standing Missionary Sex Position?

Male partners will like standing missionary because it gives his arms a break from having to hold his weight during standard missionary. He may also find that in standing sex, he has more power and flexibility to thrust. He’ll also get a better view of his partner’s body while standing in front of her. Men are visual and love to look at their partner’s body, especially while doing the dirty deed. He’ll get a chance to see her breasts jiggle in the most enticing way. If he wants to have his hands free to roam her body, he can ask her to wrap her legs around him. This will allow him to use his hands to caress her stomach, breasts, or play with her clitoris.

Who Is the Standing Missionary Sex Position Perfect For?

Tips and Tricks To Make Standing Missionary Even Better

Make It All About Her

There is nothing hotter than orgasming while your partner is inside of you, but unfortunately for most women, penetration alone doesn’t cut it. Clitoral stimulation is important for women to be able to climax during sex. Standing missionary provides an advantageous position for stimulating the female partner’s clitoris during penetration. If you want to really focus on her pleasure alone, try this: While you are in standing missionary position, enter your partner nice and slowly. Keep your penis inside of her, but don’t thrust just yet. Use your fingers or her preferred sex toy and stimulate her clitoris until she orgasms. This will give her the unique opportunity to orgasm while also feeling you inside of her. She’s going to love it, trust us. You will also get enjoyment out of feeling her vagina contracting around your member as she is experiencing pure ecstasy. It’s a win-win for both of you. Start Off With Oral

Though oral is easily performed while on the bed, it may be even easier to perform pre-standing missionary position. According to surveys, about 95% of women enjoy oral sex. Going down on your female partner is not only sexy, but it will also make it more likely for her to orgasm. With her butt already on the edge of the bed, you are in a prime position to kneel and place your face right between her legs. Once she’s had as much as she can handle, you can quickly stand up and assume the standing missionary position. It’s such an easy way to spice up a regular bedroom session. Why this sex position is called the butterfly might have something to do with how your bodies will resemble a butterfly with its wings closed when you are doing it correctly. Beyond that, we’re not sure why this sex position is named after the colorful insect. What we do know is that the butterfly sex position is a super simple and easy transition from standing missionary. The only difference between standing missionary and the butterfly is the female partner’s leg placement. Instead of her partner holding her thighs at his side, she will lift her legs up higher until each leg is resting on each of his shoulders. From here, he can penetrate her more deeply than in standing missionary position. Deeper penetration is a bonus for both partners, though the male partner should be careful not to thrust too deeply as that can be uncomfortable for some women. In the butterfly position, the male partner will have his hands free to roam his partner’s body. He can use them to caress her legs, stomach, or breasts. However, doing so will mean he will have to lean forward, which may put more strain on his partner’s hamstring muscles. He may have to pull back if leaning forward becomes too uncomfortable for her. In that case, he can instead use his hands to grab onto her hips or thighs. In doing so he will have a better ability to thrust more vigorously if he and his partner are into rougher sex. If standing gets to become too tiring for the male partner, he can opt to move to the bed where he can perform the butterfly kneeling instead of standing.

Though the launch pad is typically performed with the male partner taking a kneeling position, it can easily be performed while in standing missionary position. To do it, get into standing missionary position, except have the female partner place both feet on either side of the male partner’s chest. Her hips should be raised slightly as her partner then thrusts in and out of her in this position. He can help hold her hips up with his hands or grab onto her thighs for more leverage while thrusting. The launch pad may be an especially great position for female partners who have partners with larger penises. By placing her feet on her partner’s chest, she’ll have more control over the depth of penetration. If he gets too deep, she can easily push against him with her legs to stop him. This will let him know that he needs to slow down and perform more shallow thrusts. Additionally, the female partner can use her feet to control the width of entry. If she wants to make penetration feel tighter, she should keep her feet closer together. Placing them farther apart from each other on her partner’s chest will make the point of entry wider, which might be necessary if her partner’s penis is particularly big.

The criss-cross position is also originally meant for penetration in a kneeling position but is easily performed while in standing missionary. To do it, the female partner will place her left ankle over her partner’s right shoulder then cross her right leg over her left leg so that her right ankle rests on his left shoulder. Crossing her legs in this way will make penetration feel super tight. This positioning of the legs is ideal for male partners who have smaller penises as it will make him feel bigger while inside his partner. Both partners will benefit from the added friction the criss-cross position allows. To change the depth of penetration, put pillows underneath the female partner’s hips to raise her up higher. This will also take some of the tension off of her lower back in this position. The male partner can do this himself if he wants to by using his hands to prop her hips up while he is thrusting. He can raise or lower her hips to change the level of penetration and find a position they are both comfortable with. Standing missionary position is an easy sex position for couples of all shapes and sizes. It is a perfect example of how sex can be simple yet incredibly sexy. Contortionist sex positions may be enjoyable for those with incredible flexibility, but for most people, they are more trouble than they’re worth. If you and your partner are in the mood for easy love, then standing missionary is just that. Don’t be afraid to try some of the variations or similar sex positions. Sometimes it takes a little bit of work to get the positioning just right for ultimate pleasure. Though standard missionary style may get a bad reputation for being boring, standing missionary allows for more variation and more stimulation. It’s a classic move that any couple should incorporate into their sex life. If you and your partner are looking for something easy to try tonight, the standing missionary position may be your new go-to move in the bedroom.